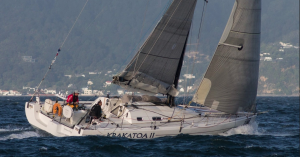 Why do you want to do the RNZ Competing in SSANZ events is always a highlight of my sailing calendar. I love the challenges and camaraderie that comes with short-handed sailing. So to have the opportunity to compete in the RNZ is an experience that couldn’t be missed.

What are the biggest races you’ve competed in My biggest offshore races include the Round Ireland, Middle Sea Race and Caribbean 600, as well as Auckland to Fiji and Noumea races. Have also completed 2 seasons competing on the World Match Racing Circuit.

How did you get into sailing  I starting sailing as a young teenager in the Pine Harbour Thursday Night Summer Series. A work colleague of my Mum invited us out on her Farr 9.2 called Itsafar. It’s where I also developed my taste for Rum and Coke….

Sailing background After getting hooked on the sport racing out of Pine Harbour I joined the BBYC Sailing Academy and then 2 years at the RNZYS Youth Training Programme. I purchased my fist boat with Scott Wilson in my early 20’s, an Elliot 770 called Real Deal. I was invited to join Kiwimatch Sailing Team and spent several years competing in match racing and sailing regattas around the world. We raced 2 years on the World Match Racing Circuit and were ranked as high as 5th in the World at one stage. During this time I also competed in several high profile offshore events and international race weeks. I have also competed locally and in Australia on TP52’s as well as been part of Beau Geste Sailing team on their TP52 and 80ft race yachts. I now own my own boat, a Ross 8m called C U Later which I hope to compete in the next RNI on. Sailing has given me the privilege of traveling the world to some unique locations whilst doing something I love which has been an incredible priviledge.

How long have you 2 sailed together I’ve had the privilege of knowing and sailing with Scott for over 18 years now. We’ve owned a boat together, competed in some of the biggest races together and had some of the best, funniest and craziest sailing adventures together. We both know each other’s strengths and weaknesses which will be invaluable to a successful race.

Funny stories  So many funny stories…. From Scott and I delivering a Beneteau down the English channel with the autohelm on and both of us asleep in the cockpit. The time lightening fused the kite halyard to the mast. Or the pizza box toilet on our first cruising trip on the Real Deal.

Scariest yachting moment  I think I have been quite lucky with my sailing that I have never been in a situation where I have truly felt scared. Plenty of times I have been on boats that are on the limit but have always felt in control of the situation. Probably the worst moment for me was sailing on my friends 8.5m tri and I fell off the bow whilst doing a job change in a squall. I was hanging on under one of the beams while the lads tried to stop the boat so I could climb back on board. That was a bit marginal.

What is your offshore Vice Eat too many bags of snakes.

What do you hope to get out of doing the RNZ  A sense of achievement. To accomplish a challenge that only a few sailors have had the privilege of doing. A to see some of the countries spectacular coastline.

What inside tips do you have for others wanting to compete in 2 handed racing at this level  Ensure you are confident in performing any task on the boat, cold, wet tired and in the dark. It’s no good just being a good helmsman when you need to find a fuel leak in the bilge at 2am after a long watch.

What’s your team motto Always look after your mate, there is nothing more important than safety.

Family  My Mum is my biggest supporter and I know my Dad will be looking down on me to ensure a safe trip.

When you cross the finish line, what will you be most hanging out for? Sleep!